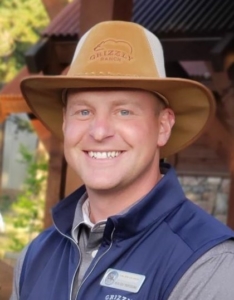 In 2008 a fellow Marine brought Olsen onto a golf course in Oahu, Hawaii, and there began his love for the game. For the past 11 years, he has developed his career as a Head Golf Professional, going on seven years now at Grizzly Ranch.

Immediately following high school, Olsen joined the United States Marine Corps. During his service from 2005 to 2009, he served two tours in Iraq.

Baty brings over 17 years of experience to his Superintendent position at Grizzly Ranch Golf Club where he is responsible for the management of all turf and landscaping. He started at the club in 2004 as the Assistant Superintendent. In 2009, he was promoted to Superintendent.

Baty was part of the “Grow In” at Grizzly Ranch and notes that as “a career highlight”.

In 1998 he moved to California from Texas and took a job at Beale A.F.B. where he made one visit to the course and knew that being a Superintendent was for him. He earned his Turf Certificate from the University of Georgia and completed the GCSAA Intern Program. He then worked at Peach Tree Country Club and Serrano Country Club and then El Dorado Hills Golf Club before joining Grizzly Ranch.